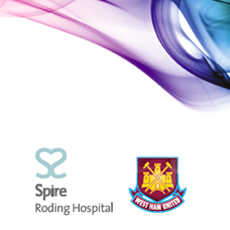 This season Spire Roding Hospital became the official private hospital of West Ham United Football Club with the news being made public to fans at a home game via a pre-match animation on the jumbotron screen, digital pitch side hoardings and in the official match-day programme.

Gosling’s brief was to create dual branded campaign assets across print, digital and video to launch the collaboration and convey the message that it was both strategic and medical. The design needed to mark a moment, but also enable future broadcast use.